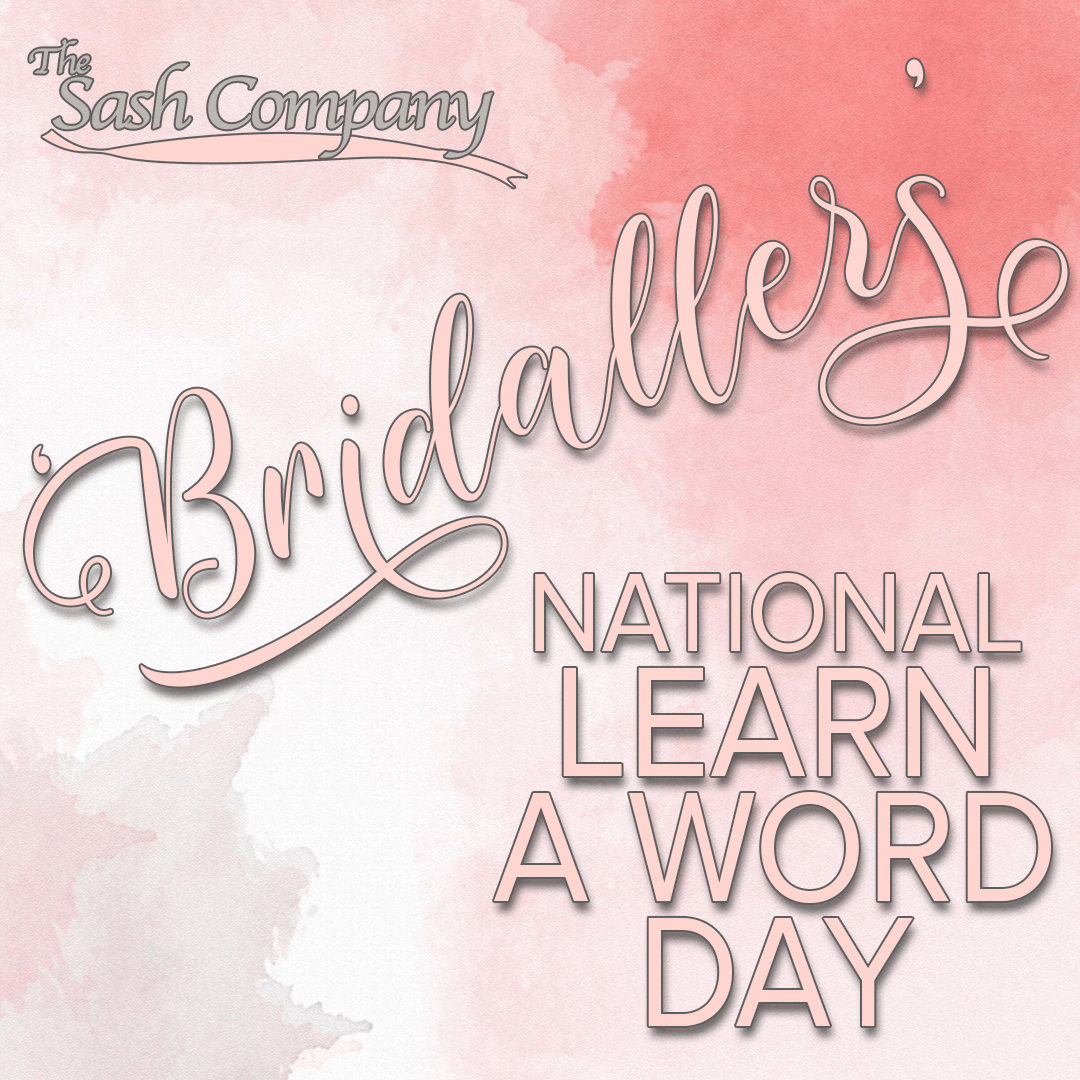 October 15th is National Learn a Word Day, so The Sash Company felt it was appropriate to do some research and find some of the more obscure English words related to weddings!

If the expression "wedding guest" feels too impersonal or generic for your tastes, perhaps you'd like to call your beloved revelers bridallers. The singular of this rare word means "a guest at a wedding." Its root word, bridal, originally meant "a wedding" or "a wedding feast." The origin of the word bride is uncertain, although it might be linked to the Proto-Indo-European root bru- meaning "to cook, brew, make broth."

If witnessing a heartfelt exchange of wedding vows moves you to song, take note: the resulting ditty might be referred to as an epithalamion, defined as "a song or poem in honor of a bride and bridegroom." It is very close in meaning to the word prothalamion; both words are built on the Greek word for “bedroom” or “bridal chamber,” thalamus. The difference lies in their prefixes: epi- means "upon," and pro- means "before." Prothalamion, which refers to a song or poem written in celebration of a forthcoming wedding, was coined by the English poet Edmund Spenser, author of The Faerie Queene.

Wedding terminology is peppered with words that have been historically bound to gender, such as bride and groom. But one lesser-known wedding word with unisex applicability is paranymph, meaning "a groomsman or a bridesmaid." It translates literally from the Greek paránymphos as "the person beside the bride." The oldest sense of the word nymph referred to a class of lesser deities of mythology, though by the late 1500s, the term could refer, less supernaturally, to a maiden.

If you're one of the many folks flying solo this wedding season, or if you go out of your way not to catch the bouquet at the reception, you might want to have this word in your back pocket: agamy is the state or quality of being unmarried. This word can also refer to the aversion to the institution of marriage. The combining form -gamy means "marriage" or "union," as in monogamy or polygamy.

Themes of trust and truthfulness are woven into many of the words we use to talk about marriage. Affiance means "to pledge by promise of marriage." It shares a root with fiancé in the Latin fidere, meaning "to trust." Similarly, the word betroth, which means "to arrange for the marriage of" comes from the Old English word for "truth."

To walk down the aisle is to embark on a lifelong journey, which is perhaps why the Scottish dialectical term foy, which broadly means "a farewell gift, feast, or drink," is sometimes used in Scotland to refer to what people in the US might call a bachelorette party: a party given in honor of a woman on the eve of her marriage. Etymologists link it to the French term voie meaning "way” or “ journey."

A trousseau is an outfit of clothing or household linen for a bride. Historically, it has been used to refer to the linens and other accoutrement that a bride collects to furnish the house she will share with her husband. But nowadays, it's often used to refer to the robes and lingerie that a bride wears on her wedding night. It can be traced to the Middle French term troussel meaning "parcel, bundle."

For many, wedding vows are a once-in-a-lifetime occurrence, but for some, the second time down the aisle is the charm. Deuterogamy is a second marriage after the death or divorce of the first husband or wife. Another word for this is digamy (not to be confused with bigamy, the act of marrying while one has another spouse). The first element in deuterogamy, deutero-, means "second," giving us words such as deuteragonist, which refers to the actor next in importance to the protagonist.